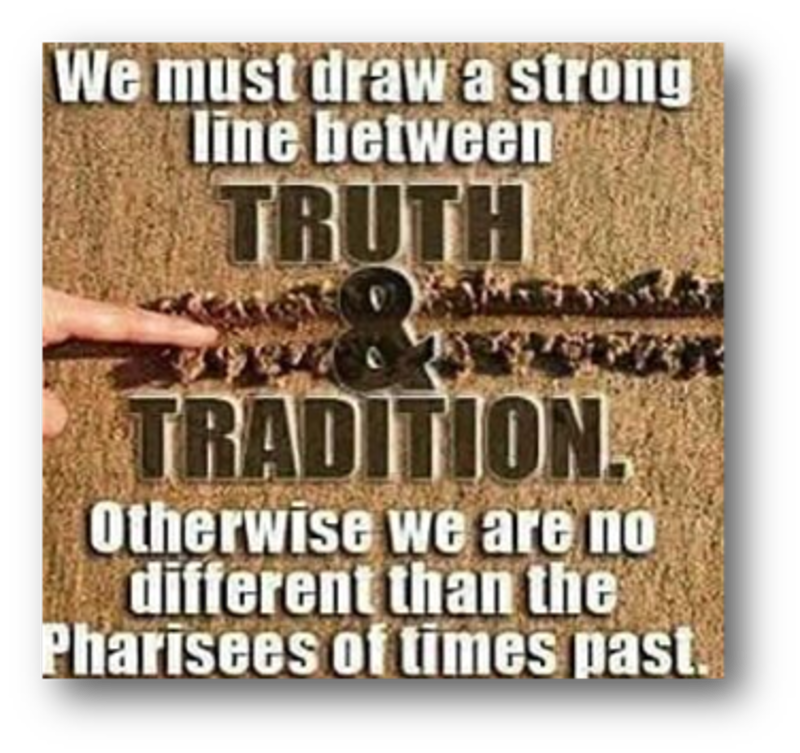 “The Pharisees and some legal experts from Jerusalem gathered around Jesus. They saw some of his disciples eating food with unclean hands. (They were eating without first ritually purifying their hands through washing). The Pharisees and all the Jews don’t eat without first washing their hands carefully. This is a way of observing the rules handed down by the elders.  Upon returning from the marketplace, they don’t eat, without first immersing themselves. They observe many other rules that have been handed down, such as the washing of cups, jugs, pans, and sleeping mats. So the Pharisees and legal experts asked Jesus, ‘Why are your disciples not living according to the rules handed down by the elders but instead, eat food with ritually unclean hands?’ He replied, ‘Isaiah really knew what he was talking about when he prophesied about you hypocrites. He wrote, 'These people honor me with their lips, but their hearts are far away from me. Their worship of me is empty, since they teach instructions that are human words. You ignore God’s commandment while holding on to rules created by humans and handed down to you.’   Jesus continued,  ‘Clearly, you are experts at rejecting God’s commandment in order to establish these rules. Moses said, Honor your father and your mother,  and the person who speaks against father or mother will certainly be put to death. But you say, If you tell your father or mother, ‘Everything I’m expected to contribute to you is corban (that is, a gift I’m giving to God),’  then you are no longer required to care for your father or mother.  In this way, you do away with God’s word in favor of the rules handed down to you, which you pass on to others. And you do a lot of other things just like that.’ Then Jesus called the crowd again and said, ‘Listen to me, all of you, and understand.  Nothing outside of a person can enter and contaminate a person in God’s sight; rather, the things that come out of a person contaminate the person.’ After leaving the crowd, he entered a house where his disciples asked him about that riddle. He said to them, ‘Don’t you understand either? Don’t you know that nothing from the outside that enters a person has the power to contaminate? That’s because it doesn’t enter into the heart but into the stomach, and it goes out into the sewer.’  By saying this, Jesus declared that no food could contaminate a person in God’s sight.  ‘It’s what comes out of a person that contaminates someone in God’s sight,’ he said. ‘It’s from the inside, from the human heart, that evil thoughts come: sexual sins, thefts, murders, adultery, greed, evil actions, deceit, unrestrained immorality, envy, insults, arrogance, and foolishness. All these evil things come from the inside and contaminate a person in God’s sight.’”

Acts 2:46  “EVERY DAY they continued to meet  together in the temple courts. They broke bread in their homes and ate together with glad and sincere hearts…”

2. Honor God with your Heart not just your Lips

Mark 7:6  “He replied, ‘Isaiah was right when he prophesied about you hypocrites; as it is written: These people honor me with their lips, but their hearts are far from me.’”

Romans 3:19-20  “We know that everything in the Law was written for those who are under its power. The Law says these things to stop anyone from making excuses and to let God show that the whole world is guilty. God doesn’t accept people simply because they obey the Law. No, indeed! All the Law does is to point out our sin.”

3. Understand your Heart is Bad from Birth

Jeremiah 17:9  “The heart is deceitful above all things and beyond cure. Who can understand it?”

4. Accept Jesus to get a New Heart

Ezekiel 36:26  “I’ll give you a new heart, put a new spirit in you. I’ll remove the stone heart  from your body and replace it with a heart that’s God-willed, not self-willed.”