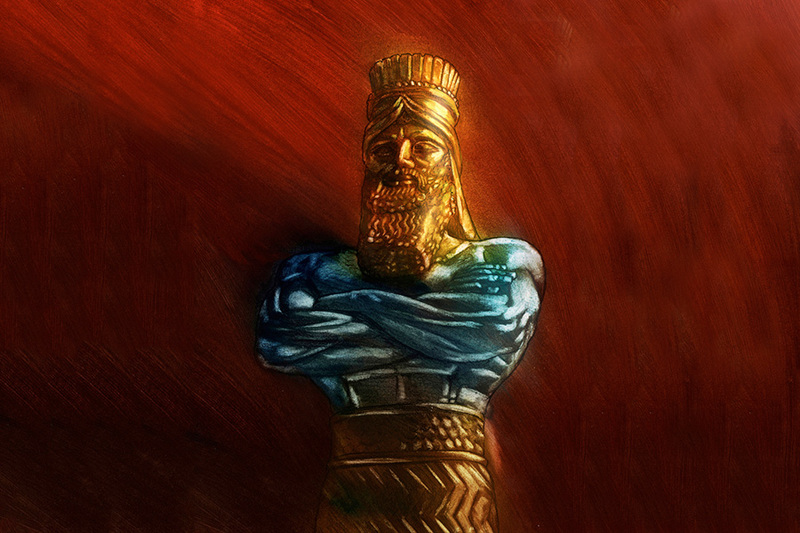 Daniel 2:31-35, “You looked, O king, and there before you stood a large statue–an enormous, dazzling statue, awesome in appearance. The head of the statue was made of pure gold, its chest and arms of silver, its belly and thighs of bronze, its legs of iron, its feet partly of iron and partly of baked clay. While you were watching a rock was cut out, but not by human hands. It struck the statue on its feet of iron and clay and smashed them. Then the iron, the clay, the bronze, the silver and the gold were broken to pieces at the same time and became like chaff on a threshing floor in the summer. The wind swept them away without leaving a trace. But the rock that struck the statue became a huge mountain and filled the whole earth.”

Daniel 2:36-38, “This was the dream, and now we will interpret it to the king. You, O king, are the king of kings. The God of heaven has given you dominion and power and might and glory; in your hands he has placed mankind and the beasts of the field and the birds of the air. Wherever they live, he has made you ruler over them all. You are that head of gold.”

Daniel 2:39-45, “After you, another kingdom will rise, inferior to yours. Next, a third kingdom, one of bronze, will rule over the whole earth. Finally, there will be a fourth kingdom, strong as iron–for iron breaks and smashes everything–and as iron breaks things to pieces, so it will crush and break all the others. Just as you saw that the feet and toes were partly of baked clay and partly of iron, so this will be a divided kingdom; yet it will have some of the strength of iron in it, even as you saw iron mixed with clay. As the toes were partly iron and partly clay, so this kingdom will be partly strong and partly brittle. And just as you saw the iron mixed with baked clay, so the people will be a mixture and will not remain united, any more than iron mixes with clay.”

THE KINGDOMS OF THE GENTILES

Luke 21:24b, “They will fall by the sword and will be taken as prisoners to all the nations. Jerusalem will be trampled on by the Gentiles until the times of the Gentiles are fulfilled.”

What Does each Section of the Statue Represent?

THE KINGDOM OF GOD