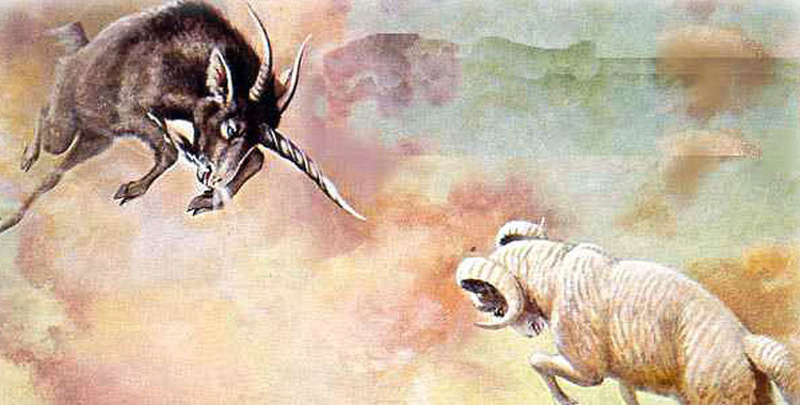 Daniel 8:27, “Then I, Daniel, was overcome and lay sick for several days. Afterward I got up and performed my duties for the king, but I was greatly troubled by the vision and could not understand it.”

THE PROPHETIC MEANING OF THE VISION

Daniel 8:22-24, “The two-horned ram represents the kings of Media and Persia. The shaggy male goat represents the king of Greece, and the large horn between his eyes represents the first king of the Greek Empire. The four prominent horns that replaced the one large horn show that the Greek Empire will break into four kingdoms, but none as great as the first. At the end of their rule, when their sin is at its height, a fierce king, a master of intrigue, will rise to power. He will become very strong, but not by his own power. He will cause a shocking amount of destruction and succeed in everything he does. He will destroy powerful leaders and devastate the holy people.”

2. A UNI-HORN GOAT: The Greek Empire under Alexander the Great

Isaiah 66:8, “Who has ever seen anything as strange as this? Who ever heard of such a thing? Has a nation ever been born in a single day?”

Luke 21:24, “Jerusalem will be trampled underfoot by the Gentiles until the times of the Gentiles are fulfilled.”

Ezekiel 37:21, “I will take the sons of Israel from among the nations where they have gone…and bring them into their own land.”

Isaiah 11:12, “He will raise a banner for the nations and gather the exiles of Israel; He will assemble the scattered people of Judah from the four corners of the earth.”

Isaiah 27:6, “Israel shall blossom and bud and fill the face of the world with fruit.”

3. THE FOUR HORNS: The four generals who divided Alexander’s territory.

THE PERSONAL MESSAGE OF THE VISION

1. Alexander is a picture of worldly greatness marked by personal failure

Mark 8:36, "What does it profit a man if he gains the whole world and loses his soul?"

2. Antiochus is a prototype of the Antichrist

Revelation 13:15, "He was given power to give breath to the image of the first beast so that it could speak and cause all who refused to worship the image to be killed. He also forced everyone, small and great, rich and poor, free and slave, to receive a mark on his right hand or on his forehead, so that no one could buy or sell unless he had the mark, which is the name of the beast or the number of his name."

Matthew 24:15, “So when you see standing in the Holy Place ‘the abomination that causes desolation’ spoken of through the prophet Daniel, let the reader understand.”

Verse 25, “He will cause deceit to prosper, and he will consider himself superior. When they feel secure, he will destroy many and take his stand against the Prince of Princes. Yet he will be destroyed, but not by human power.”

2 Thessalonians 2:4,8, “He will oppose and will exalt himself over everything that is called God or is worshiped, so that he sets himself up in God’s temple, proclaiming himself to be God. And then the lawless one will be revealed, whom the Lord Jesus will overthrow with the breath of his mouth and destroy by the splendor of his coming.”

3. Daniel is a portrait of steadfast service in tough times

Verse 27, “Then I, Daniel, was overcome and lay sick for several days. Afterward I got up and performed my duties for the king, but I was greatly troubled by the vision and could not understand it.”

Mark 13:32-34, “No one knows about that day or hour, not even the angels in heaven, nor the Son, but only the Father. Be on guard! Be alert! You do not know when that time will come. It's like a man going away: He leaves his house and puts his servants in charge, each with his assigned task, and tells the one at the door to keep watch.”